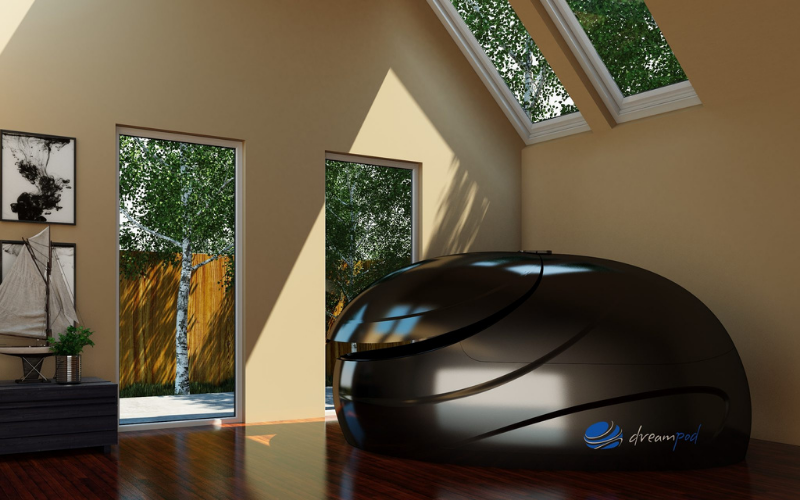 Sensory deprivation tanks aren’t a new thing, though you may have just learned about them. Their popularity is increasing as scientists find more evidence that they work. However, the first float tank was created by Dr. John C. Lily in 1954, and it became commercially available in 1972.

Initially, the public and the medical industry were skeptical about float tanks. That may have been because Dr. Lily’s research was a bit controversial. After developing the tanks, he began to experiment with LSD and ketamine while floating, and people believed hallucinogens to be solely dangerous at the time.

Today, though, there’s growing evidence that regular float tank use is beneficial for conditions like anxiety, chronic pain, and sleep issues. These facts have led to floating tank centers opening worldwide. However, for many, going to a center becomes a chore. Regular float tank users often want to bring the experience home.

Below, we discuss the best sensory deprivation float tanks for home use. First, let’s dig into what float tanks are and review the current science behind them.

What is a Sensory Deprivation Tank?

Sensory deprivation tanks, or float tanks, are usually large, enclosed fibreglass tubs. Most of them measure about eight feet long and four to five feet wide. They usually contain about eleven inches of extra-salty water that’s heated to body temperature.

The saltwater creates more buoyancy so that the user floats effortlessly on its surface. The tank lid closes over the top to block out light and sound. It never latches or locks, though, and there’s plenty of passive air circulation.

Ideally, inside a sensory deprivation tank, the user experiences no light or sound. Because you’re floating, there’s no contact with the side of the tub. The result is a total lack of sensory input, which can be alarming at first. For some, the float tank experience takes a little getting used to.

After about twenty minutes, though, most people find that they start to relax. The lack of sensory input puts them into a meditative state where their muscles and brain can fully disengage.

Some users report hallucinations in this state, similar to what one might experience in deep meditation or under the influence of certain hallucinogenic drugs. Many, though, simply find that they go into a state of pure relaxation. They find relief for any anxiety they’re having and find they experience better sleep, even days after their float tank session.

Using a float tank is pretty simple. In many regards, it’s just like climbing into your regular bathtub. However, there are some things you can do to prepare yourself for the experience.

Most float tank centers recommend you avoid caffeine or stimulants for at least several hours before you climb in. You also may want to avoid shaving that day, as the salt can aggravate freshly shaved skin.

Ideally, you’ll use your float tank or visit a float center at least once a week for several months to feel full benefits. However, there’s nothing wrong with using a float tank more than that. Many users say they make their float sessions a daily habit, just like meditation or other relaxation practices.

When considering a float tank, you might come across the term “flotation-REST.” REST stands for Restricted Environmental Stimulation Therapy, and it’s the scientific way of referring to therapeutic float tank use.

Recent neuroimaging done by the Float Clinic and Research Center at the Laureate Institute for Brain Research in Tulsa, Oklahoma, suggests that floating can decrease anxiety by levels on par with prescription medications. Their growing research seems to show that floating may be a shortcut to expert-level meditative states that would typically take years to cultivate.

Where to Buy a Sensory Deprivation Tank

The benefits of sensory deprivation tanks seem nearly endless. In today’s ever-changing environment, most of us could use help with relaxation, and having a float tank at home could be the perfect solution.

Below, we discuss two companies that sell top-notch sensory deprivation tanks for home use: Dream Pod and Zen Float Co.

Dream Pod offers several float tank variations for both commercial and home use. When it comes to their home appropriate models, they sell:

The Dreampod Home Pro measures 7.5 feet by 3.5 feet and is a solid fiberglass tub with a removable cover. It’s effortless to operate, and the smooth surfaces make it simple to clean. It requires next to no setup and comes almost ready to go upon delivery.

A wired remote allows users to pick their float length and temperature. It also lets them program and run a chemical injector to sanitize the tank.

Thanks to the lid, the Dreampod Sport Home truly removes all outside distractions. Users don’t have to worry as much about external lights or sounds.

The only real downside to Dreampod products is their price. These tanks are high-end and cost users a lot upfront. They’re straightforward to maintain and come with excellent reviews, but the expense of a Dreampod tank isn’t feasible for many users.

Zen Float Co. offers much more affordable float tank designs. Their products are also portable, making them ideal for users who might not own their dream home yet, and hope to take their tank with them should they move in the future.

Both designs feature a pyramidal shape that allows condensation to run down the tank walls and back into the tub, rather than forming droplets on the ceiling that may interrupt your float.

The floating tent is vinyl with a stainless steel frame. It arrives in two boxes and requires a couple of hours to set up. It’s not soundproof, but if you set it in a quiet location, it will still replicate a commercial float tank experience by blocking out all light.

The thick vinyl sides retain heat reasonably well, but you will have to spend some time cleaning the tank yourself. There’s no wired remote with chemical injectors you can automate like there is with the Dreampod tanks.

The Zen Float Tank is similar to the float tent but made with deep-stitch PVC inflatable technology. If you’ve ever used an inflatable stand-up paddleboard, this tank uses the same material. It’s technically air-filled PVC, but it feels solid and is very durable.

The Zen Float Tank is much easier to set up and is still affordable. It’s also more efficient energy-wise than the float tent. It will hold heat better and provide some sound insulation.

No matter which float tank you choose, the benefits are clear. Float tanks can help you to relax, which may lead to better sleep. Research suggests they also help treat anxiety, maybe just as well as prescription medication.

For many, float tanks also provide mental clarity, and they may help users who experience stress-related pain. On top of that, float tank users often report feelings of bliss and euphoria after float tank use, and many find they’re more optimistic for days to come.

The benefits of floating are numerous, and having a tank at home gives you the most accessible access.

Take a look at our list of frequently asked questions to see if you might find an answer to your question about at-home float tanks in 2021.

How often should you change the water?

You should change your float tank water every 1000 uses, or about once a year.

is floating safe for pregnancies?

Yes, float tanks are safe during pregnancy. They may help alleviate everyday aches and pains by taking some of the strain off pregnant womens’ spines and feet.

Do sensory deprivation tanks cause hallucinations?

Can you sleep in a float tank?

Sometimes users fall asleep inside their float tank because they’re so relaxed. Given that you’re only floating in water that’s about a foot deep, falling asleep isn’t dangerous, but we don’t recommend sleeping in a float tank purposefully.

There is evidence that float therapy helps stress management, which may play a role in weight loss.

Sensory deprivation tanks are relatively safe. The only negative side effect is possible hallucinations, which may cause distress for some users.

How long can you stay in the tank?

The length of your float is up to you. Most users go with sixty to ninety-minute floats, especially when starting out. Some choose to increase their float time to two or even three hours.

Can you drown in a sensory deprivation tank?

The amount of salt in a sensory deprivation tank will force you to float, making drowning near impossible. However, if you were in an emergency and flipped and could not flip back around, drowning would be possible.

Who shouldn’t use a sensory deprivation tank?

If you’re claustrophobic, have epilepsy, or have low blood pressure, it’s best to avoid sensory deprivation tanks. Otherwise, float tanks are safe for users of all ages.

Commercial facilities will have their own regulations and probably won’t let you float if you feel sick or have an open wound. However, that’s less of a problem with home use.

What should you wear?

Though you can certainly wear a swimsuit, most people choose to float completely naked. In commercial settings, you may be required to shower pre and post-float. Though no one will force you to, we suggest doing the same thing at home.

How do you protect your hair?

Regardless of what you do, your hair will get wet while floating, even if you wear a swim cap. The water is super salty, like swimming in the ocean, so you’ll want to wash your hair post-float.

You should also avoid floating within 48 hours of applying color or a keratin treatment.

Can I float on my period?

Yes, you can float on your period. Act like you’re getting in a pool and wear a tampon. You may want to coat the string with petroleum jelly to keep the saltwater from wicking into it.

Are float tanks good for your skin?

Float tanks usually contain magnesium salt, which is good for your skin. It may help clear adult acne and is a natural exfoliant.

Does floating detox your body?

Between the magnesium salt in the water and the total relaxation that floating provides, you could consider it a body detoxifying experience. Relaxed muscles allow blood to flow more quickly, so your body naturally detoxes. At the same time, magnesium salt helps exfoliate your skin.

Are float tanks good for eczema?

Many people with eczema report skin improvements after floating. That’s probably because magnesium salt is an exfoliant and an antimicrobial. So, it can help clear up skin conditions like eczema.